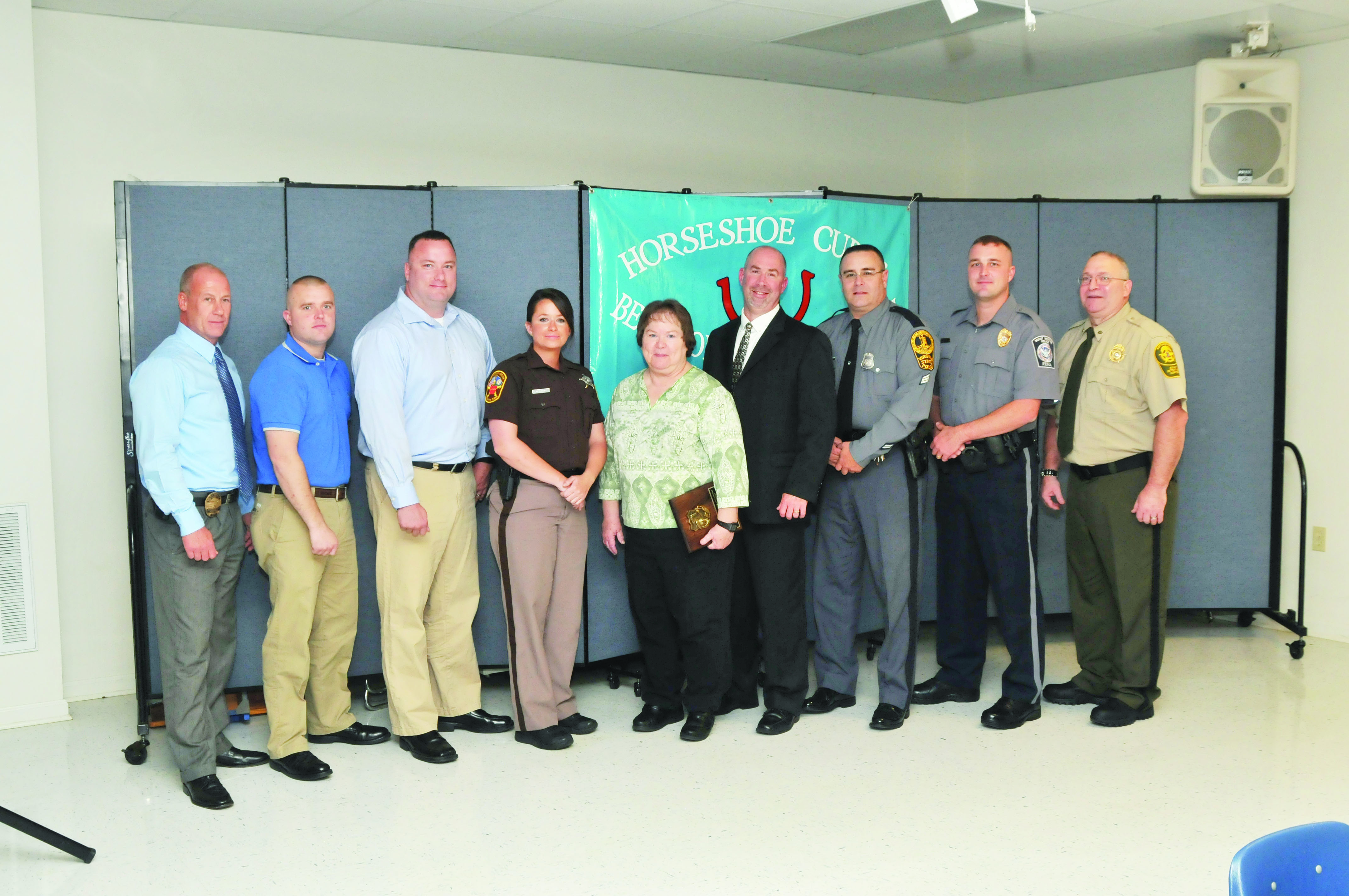 Some one hundred guests of the Horseshoe Curve Benevolent Association gathered at the Blue Ridge Fire Hall on the evening of September 12, in the Association’s eleventh annual recognition and celebration of outstanding efforts shown by our community’s officers in law enforcement.  Following fellowship, with music by Tom Shabla and Blaine Perry, moderator Jim Wink of the Association began the proceedings.  Reverend Canon Dwight Brown of Grace Episcopal offered an invocation, reciting from Ecclesiastes Chapter 3.  After the Pledge of Allegiance, all enjoyed a hearty dinner.

Virginia State Senator Jill Holtzman Vogel thanked all officers for their service, and for the exceptional communication that law enforcement in Clarke and Frederick provide with the Virginia Senate, advising our lawmakers on local needs.

Nominations for awards were made by area sheriffs and police chiefs.  In addition to our community’s respect and thanks, each awarded officer received a plaque from the Association, commemorating the occasion, a Certificate of Appreciation from the Virginia House of Delegates, and a letter of commendation from Senator Mark R. Warner.  Tracy Wink of the Association and Virginia Delegate Randy Minchew presented the awards.  This year’s recipients and their remarkable accomplishments are:

Officer Bowers serves as field training officer for new police officers, and has developed a system used to accurately track and document training hours and the trainee’s performance levels on the required duties.  In the process, the system identified redundancies in the training program, leading to improved efficiency and effectiveness of training.  Officer Bowers recently attended the Federal Law Enforcement Training Center’s course in managing an incident involving an active shooter.  Dustin is currently developing an active shooter training program for employees of Mount Weather’s Emergency Operations Center.

Officer McCann brings to our community a wealth of knowledge and experience, gained in twenty years of service with the Maryland Department of Corrections.  In May, he responded to an attempted suicide, assisting an inmate with a large laceration, and having lost considerable blood.  Officer McCann administered first aid and managed to stop the bleeding while coordinating emergency procedures.  The inmate later made a full recovery.  In August, Officer McCann was on routine rounds when he came upon a cell door with the window covered.  Upon investigation, he found the inmate with a bed sheet tied around his neck, unresponsive, and not breathing.  Officer McCann applied CPR and was able to reestablish a pulse.  At the Winchester Medical Center, doctors attributed the inmate’s survival to the quick and precise actions of McCann.  The inmate has since made a full recovery.

Deputy Jewell joined the office in 2009. He is a respected instructor at the Rappahannock Regional Criminal Justice Academy, where he teaches defensive tactics.  Sheriff Roper’s nomination cited Shane’s dedication to perfecting these tactics, working with experts in these matters on his own time, his spirit of willingness, and his hard work and dedication to the citizens of Clarke.

Deputy Carter has been with the office for only a year.  In that time she has shown her dedication to the office and the community at large.  She serves the community through several local civic groups, having participated in the CCAP food drive, the Evan Home for Children food drive, the Winchester Literacy Foundation summer reading program, Handley Library reading program, Running Strong Youth Offender Program, and Winchester Clean-up Days.  She is the lead advisor for the Office’s Explorer Post.

In July, Deputy Jeter made a routine stop for a speeding violation.  During the course of the incident, and with the assistance of additional officers, Deputy Jeter recovered a large amount of heroin, leading to an arrest and a suspect being charged with intent to distribute the heroin.  Deputy Jeter has since made two more arrests, stemming from the heroin problem plaguing the community.  One of these subsequent arrests led to an indictment for felony murder.

Laura Patten serves the Department as the sole civilian employee, and began working here in 1989.  She has seen a lot of change within the law enforcement profession and within our community over her twenty-six year career, which she began as a crossing guard, assisting children walking to and from school.  Laura proceeded into the role of handling the administrative business of the Department, and has seen the changes from hand written reports and typewriters to automated record keeping systems and computers in squad cars; from Polaroid photography of crime scenes to cellular telephone pictures sent electronically to a database.  Chief White’s nomination credited Laura with incorporating these changes with professionalism, and her handling and maintenance of records according to mandated protocol.

Laura maintains the flow of communication between the community and officers in the field.  Laura is indeed the smiling, understanding, and graceful face of the Department.  Next time you visit the Clarke/Berryville Government Center, please congratulate Laura on her retirement, which is planned for 2016.

Last December the Department responded to a call concerning an upper level apartment in which there was a kidnapping in progress and a suspect claiming to have a bomb.  Upon arrival, officers encountered a man holding a knife to the throat of a woman.  The man challenged police, and appeared to be attempting “suicide by cop”.  Though the suspect sought to escalate matters, officers began negotiating with the suspect, and other officers moved to effect a rescue of the woman.  Through the calm, calculated, and coordinated actions of the officers, the incident was ultimately brought to a sudden and effective resolution, as Officer Lewis took advantage of a momentary opening to subdue the suspect, thereby freeing the captive

Barns Of Rose Hill Looking To The Future

A Conversation with Dennis Banks
Scroll to top