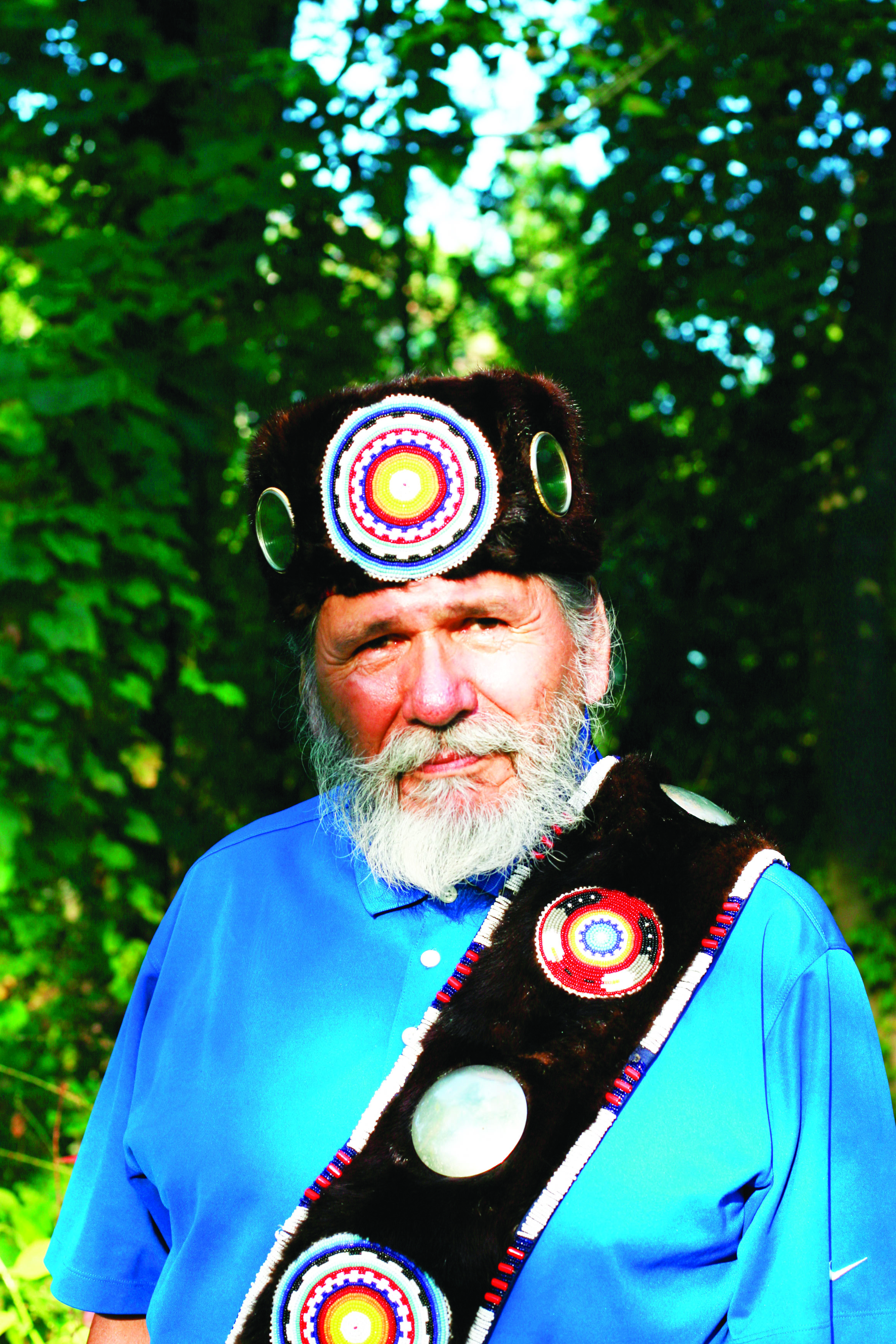 Dennis Banks, one of the founders of the American Indian Movement in 1968, will be a Master of Ceremonies (along with Native American storyteller Dennis Zotigh) at the Harvest Dance of The Gathering, a multicultural thanksgiving celebrating humanity and Native American culture October 30–November 1 at the Clarke County Fairgrounds.

The American Indian Movement (AIM) spearheaded reform of federal policies towards Native Americans through controversial protests such as Trail of Broken Treaties in 1972 and the occupation of Wounded Knee, South Dakota in 1973. The Trail of Broken Treaties was the first of several cross-country treks from the West Coast to Washington D.C. led by Banks and other Indian leaders. At the end of the walk, leaders occupied the offices of the federal Bureau of Indian Affairs and presented a Twenty-Point Position Paper to the Nixon Administration.

At Wounded Knee, Banks joined leaders of the Oglala Sioux Civil Rights Organization to occupy the town in opposition to the elected tribal leader, Richard Wilson, whom they accused of corruption. The occupation drew FBI agents and U.S. Marshalls who surrounded the town. The standoff lasted for 71 days and led to the death or injury of several federal agents and Indian protesters. For some, decades later, that conflict shrouds opinions on Banks; for others, regardless of their perspective on Wounded Knee, Banks is one of America’s great civil rights leaders.

The Observer’s Amy Mathews Amos had an opportunity to meet with Banks and organizers of The Gathering: René Locklear White, Chris (Comeswithclouds) White, Curt Hansen, and Dennis’ son Tatanka Banks to hear his thoughts on progress made since the start of the modern American Indian Movement, and his goals for native self-determination going forward. We share some of his comments from that conversation below.

On the movement’s top priority

“I think the most important part of the movement right now is to continue the emphasis on the treaty that exists between native people and the U.S. government. … That probably always will be our priority.”

“States are always trying to chip away at our sovereignty and our relationship with the U.S. government. They would like to have control over our lands and over our property and over whatever we’re doing. … But it’s not written that way and never will be. Our umbrella protection is those treaties.”

The role of the U.S. courts

“We’ve relied on (the courts) to interpret some of the real close language of those treaties. And usually in a struggle like that the balance will be usually weighed in favor of the tribes. So we rely on that.”

“There’s been a lot of improvement with the federal point of view [towards native people]. There’s been tremendous change. Not 100 percent change. There are still pockets of racism in the states that we still have to deal with. The states are always saying ‘we stole this land from them fair and square.’ But that’s not the attitude with the federal people.”

“Ironically, the best sitting U.S. President has been Richard Nixon. He was the only president that gave land back to the Indian people and reinstated what is called the trust relationship between the tribe and Congress. … He put back trust status to Menominees in Wisconsin, and the Puyallups and Nisqually in Washington State. Gave land back to the Klamaths in Oregon. Gave the whole Taos Blue Lake back to the Pueblos. He is never shown to be Indian friendly—he never showed that at all. Even when the crisis was going on at Wounded Knee, when we were surrounded by 300 FBI agents and 90 U.S. Marshalls, and all those GOON [Guardians of the Olgala Nation] squads.”

“But [Nixon counsel John] Ehrlichman met with [actor and activist) Marlon Brando and I after Ehrlichman and [Nixon Chief of Staff] Haldeman were released from Nixon’s advisory group. We wanted to find out what position Nixon had been developing at Wounded Knee, and both Haldeman and Ehrlichman said he never had a pro position either way.”

“But at one point the Justice Department came to the White House and said they had a plan to end the stand-off at Wounded Knee, and they would blanket the whole area with gas, and they would use civilian FBI and U.S. Marshalls and also military men to come in there. Nixon exploded. He stood up and said ‘No, hell no,’ he says. ‘You mean to tell me a bunch of rag tag Indians you guys can’t get under control? You can’t end it in a peaceful way? Not on my watch you’re not gonna go do that.’”

The role of health in Indian self-determination going forward

“I was struck down with diabetes nine years ago … and to me that was like a kiss of death. Because all of the people that I knew had been going to the grave at a very early age and usually with their legs being cut off, and also fingers, and they were going blind [from diabetes]. So I immediately began to learn about what diabetes was and what I could do. My pancreas was the main target in my system. I had to protect that.”

“But how could I protect it and how could I strengthen it? With a lot of vegetables. So I went to a [clinic] in Arizona to reverse my diabetes. When I checked in there my glucose was 405—that’s the sugar reading. And after the very first week that I was in there, I was on a juice fast of nine vegetables. And my glucose went from 405 to 95. … I think if I checked [my glucose] right now it would be around 120. Anything below 140 for me is a safe zone.”

“We had two walks and a motorcycle run [to educate Indian communities about diabetes]. A lot of old timers now, they’re taking their medication but they’re also drinking beer. And that’s the worst thing that can happen. Even if you drink one beer you negate what the insulin supposed to do for you. A lot of them are dying with amputations … it’s a pandemic. So I emphasize changing the diet and exercise. I‘ve walked across this country seven times.”

“Next year I’m going to do a walk against drugs. When I walk, especially in the Montana area and North Dakota, my friends say ‘Dennis there’s another issue that’s much stronger than diabetes. There’s a lot of drugs up here’. … Drugs cause suicide and depression.”

“I would like to see us develop the food too. Visiting Rene’s [Locklear White] house a couple years ago I was amazed at their corn. I was standing in their cornfield and I was raising my hand, and [the corn] was still higher. I estimated it to be like 15 feet. I’m not lying. And that’s when I thought, ‘Wow, that’s what we should all do, is have this kind of program. Growing our own food.’”

“We have land. … I said every native family in America could be sitting down right now to our own food that we’ve grown.”

“When AIM was formed in 1968, we had already pinpointed the [top] issues. … The first priority was police brutality. … We marched on the police department [in Minneapolis] that night. … The chief came down, but he defended his police department. He said ‘I know all my men, and I know none of them have a bone of racism in them’… So we took pictures all weekend long, because he wanted some proof of brutality. And Monday morning we came back. We put out probably about 40 volunteers with cameras on Friday, Saturday and Sunday, and collected all that information before we went to see him, and we had over 500 photographs. … Pushing and shoving, hitting with night sticks, hitting in the ribs, hitting in the kidneys. [The police chief] suspended six police officers. … [But] it’s still the norm. The community knows that if they’re getting drunk in the bars out there they’re going to run into brutality.”

The Washington Redskins name and mascot

“Racism goes on with professional teams and college teams. Even many years before I formed the American Indian Movement that was an issue that a lot of us talked about.”

“I think the fans are part of the racist picture. You see a lot of fans dressed up really gaudy—they take turkey feathers, and paint their faces in green and gold and other colors to make a mockery of the ceremonies that we have. At a lot of ceremonies, when somebody’s gone to the spirit world [meaning they have passed away], they’ll put paint on the person just to have a good spirit journey and to be identified. … It’s hurtful, to see somebody making a mockery out of our beliefs.”

The importance of cultural and spiritual renewal

“There was a federal policy against [practicing native ceremonies]. Anybody found participating in these so-called ceremonies were punished by withholding of rations. The very first [policies] were in the 1800s—in 1874 came the banishment of the language in the Indian schools. But first came the banishment of the ceremonies. And one of the last acts, when they couldn’t kill us all, then the boarding school was their last campaign. They took kids—over 110,000 kids were taken that first year. I was one of those that were rounded up … I was four and a half years old. I was taken to a boarding school 300 miles away. I didn’t see [my parents] for six years.“

“The total return and recall of our cultures is on the front burner right now. Immersion schools, language schools, art schools. As a matter of fact, there’s a white school in Remer, Minnesota, where they are teaching the Ojibwa language. … So these white kids are learning the language. So I see some dramatic changes coming about in the school systems. I think that’s where we’re going to tackle racism—we need to stay in the school system and do it.”

“I think with the emphasis on drugs I’m going to ask for major changes from whatever program that we start, that it be culturally based. And that it be spiritual. Those two things I believe are so important in recovering some of our children. I want us to go to another level.”

Cruise In: A Great Berryville Bash

16 Things I would want, if I got Dementia