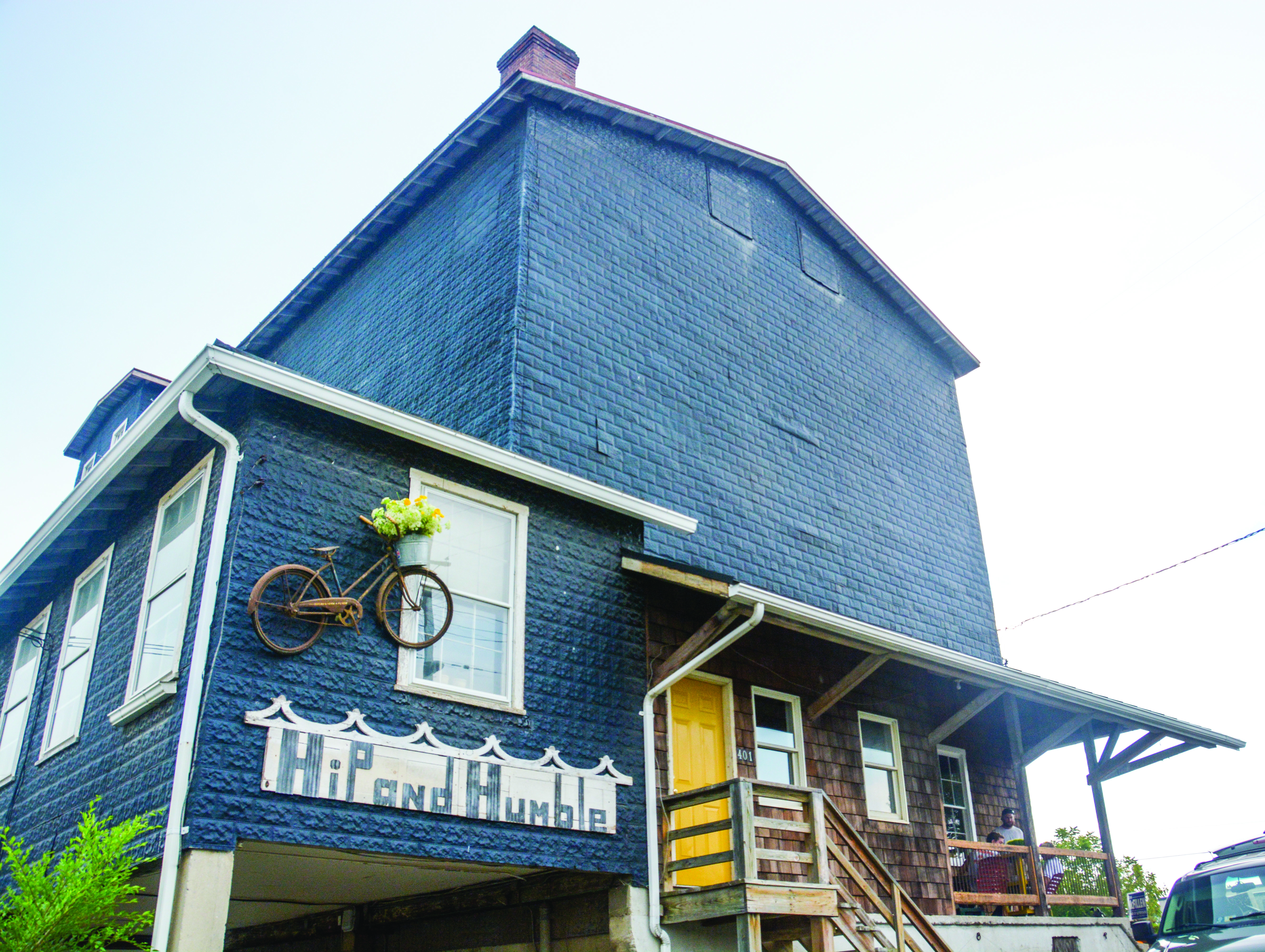 There is something about old buildings. As demands on our time force us to move faster and faster, we find ourselves rushing between our “point As” and “point Bs.” While cityscapes blur past us without inciting more than a fleeting interest, there’s simply something about old buildings. Their architecture and style are hard to overlook. When we drive past them, they seem to move by us in slow motion. Between breaths we can almost see the spectral presence of those whose lives are forever tied to these buildings of wood and stone. Such is certainly the case when one drives past Aylor’s Mill, the enormous, five-story structure located at 401 East Main Street in Berryville, VA.

The building, which sits on a narrow lot butting up against the tracks used by the Norfolk-Southern Railroad, has served a number of tenants since its construction in 1928, but the most recent persons to become stewards of this historic site are Steve Scott and Julie Ashby, owners of an interior design studio named Hip and Humble. The pair are experts in what they call “antique and architectural salvage,” a design and production process that repurposes materials and items in a manner that creates a new—and sometimes unexpected—item.

For example, wooden planks from an old corn crib (a type of granary used to dry and store unhusked ears of corn) may be reshaped and used to make a one-of-a-kind kitchen table. Perhaps the large, rusting blades of a metal windmill may find new life as a chandelier or a nonoperational vending machine transforms into a bookcase. Ashby sometimes refers to the process as being “barn again,” a play on being born again, since the results truly do give an object new life.

“Everything can have a new purpose, a new life,” Ashby asserts. “We never really know what we will find or what will find us, really. We’ll get a call to come take down an old structure or barn and we’ll bring the materials back and let them speak to us. The shop is filled with antiques that really don’t need much repurposing, as well as items we have created from the things that have found their way to us.”

Truly, Scott and Ashby see inspiration in all old things, and this is perhaps the reason they believed Aylor’s Mill was the ideal place for Hip and Humble to call “home.” The mill has been repurposed before, although one could argue that no other business has been as ideally suited for the space as one that makes old things new again. Their story is the latest chapter in a history that starts even before the current building located at the site was erected.

According to local architectural historian Maral Kalbian, the structure stands atop the ashes of an 1893 flour mill that burned down on July 14, 1927. That mill was built by Loudoun County resident Tazwell Lovette. It would eventually come to be owned by Francis L. Aylor of Culpepper, Virginia. Aylor purchased the mill in 1922, subsequently moving his wife, Salina, and daughter, Roberta, to Clarke County.

His family arrived in July of 1922 and lived initially in a Main Street hotel, according to a 1975 article appearing in the Winchester Evening Star. (The article is safely tucked away under the care of Mary Thomason-Morris, an archivist and Clarke County enthusiast with the Clarke County Historical Association.) In September, they were finally able to acquire their family home on Church Street. Things were going well, but the mill was “tinder box,” according to Mrs. Aylor. Its heart was a coal-burning steam engine and wood stoves provided its heat. For a mill that had to remain dry to effectively process the grains, it was one spark away from tragedy.

The dry wood caught fire in the July heat of 1927, and while the firemen saved his papers and records, the building itself was a complete loss. Aylor was devastated, and he spent some time considering endeavors outside of the milling industry. The aforementioned newspaper article goes on to say that the townspeople rallied around the Aylor family, and a petition imploring him to rebuild was circulated among area farmers. Many even offered to help financially in his efforts to reestablish the mill that was so critically important to the county’s economy. Aylor decided he could not leave the people and the community who had shown him such support, and he set out to rebuild his mill—this time leaving behind the technology of the past and powering operations with electricity.

The structure standing today in place of the original mill remains much as it was when it was completed in 1928. Every inch of the building, which is now 87 years old, has a story. Even the wood, which stands underneath the pressed-tin shingling that covers its exterior, has a genesis tale of its own.

In a report titled A Brief History of Aylor’s Mill, Kalbian writes, “According to newspaper and oral accounts, the timber used for the construction of this mill came from Oregon and was shipped through the Panama Canal to Norfolk where it was loaded onto flatbed railcars and transported to Berryville.” A journey of more than 2,700 miles brought this material here to become part of a building that stands as a reminder of the importance of grain milling in Clarke County’s history. Many residents spent their lives working in the mill, and it is easy to visualize their labor when you visit.

You can practically see the women sewing up the tops of canvas bags destined for the passing railcars. The interior, with woods unpainted and exposed, has the feel of a place where thousands of footsteps have worn a path before. There is an unseen current to the space that almost provokes one to mimic the hurried gait of a millworker struggling to keep pace with the flow of work.

The scene of workers laboring at Aylor’s Mill could be appreciated until changes in demand for grains caused Mr. Aylor to close his business in the late 1960s. Grains were no longer the lifeblood of the agriculturally based economy of Clarke County. Orchards were now “king,” and his mill’s profits were greatly reduced from what they once were. He was 87 years old when he finally let the mill fall silent. He died two years after shuttering its doors.

Mrs. Aylor soon after sold the building. After changing hands twice more, it was purchased by Clarke County Roofing and Guttering, a business operated by Jay Hillerson. Ashby is humbled to have been entrusted with the building. “I know the mill is very important to Mr. Hillerson,” she says. “It’s an honor really to be allowed to become part of its story.”

Alongside Scott and Ashby, three young men are also leaving their mark on the structure. Eric Stewart, Kaleb Langley, and David Betz are the three “working rock stars,” as Ashby calls them, who are helping transform the space into the warehouse, workshop, and showroom that will store, inspire, and house the latest Hip and Humble creations. It’s taken a lot of work, but the process has been part of the fun, explains Scott.

“The other day we opened a door that hadn’t been opened in 75 years,” he says. “We are cleaning and repairing and restoring everything we can. It’s work, but it’s a lot of fun.” Much of the building will not be accessible to the general public, but every inch has nonetheless received careful attention that only people completely invested in saving and repurposing that which is old would give.

Ashby relays, “The building deserves to have us there and we are very, very lucky to be able to do the work. Steve and I really believe that if we give to the building it will give back to us. We are very committed to the work, and we are so excited to watch its transition.”

As that transition has taken shape over the last few months, the work that drives their business has simultaneously continued. Objects and materials still inspire them. American painted furniture, country style furniture, general store items, and more come together to create a scene that tells a story, a story either of times long gone or of how modern style can pay homage to the innovation and construction of the past.

Locals acquainted with how that story has been told while Hip and Humble operated out of its Strasburg studio will find the operation’s setup in Aylor’s Mill to be familiar. “We don’t create to keep up with trends,” Ashby explains. “We create for ourselves and our customers. We merge humble furnishings with great, upscale pieces—some of which we have created and others we have simply refurbished. All of these pieces are brought together in a space and staged beautifully, and now they are being brought together in a space that really honors the intent of our work.”

“We love what we do, Ashby says. “The work becomes part of these people’s homes. We become a small part of their stories. We pour ourselves into these objects and well, it works.”

“It works,” Scott agrees. “And we can’t wait to be making it work in the mill.” To learn more about Hip and Humble, www.hipandhumble.net or like “Hip and Humble Interiors” on Facebook. Their first big sale is October 2-4 from 10am to 7pm, so be sure to make time to visit the business that is giving an old mill new life.

First Farmers’ Harvest Ball Set For October
Around Clarke County in September/October Out Of The Ashes, The Spirit Is Strong
Scroll to top