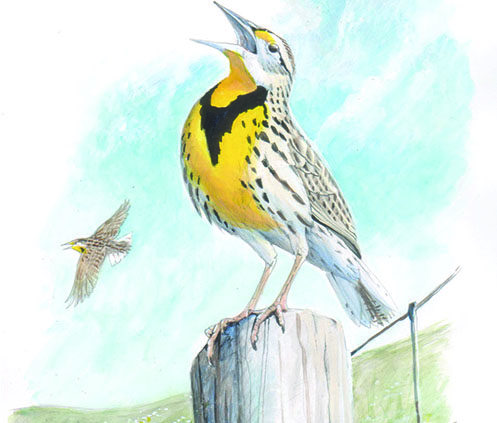 Story and illustration by Doug Pifer
Eastern meadowlarks used to be common birds in local hayfields, and their songs drifted across the fields in the early summer air. Now they’re on a growing list of field nesting birds — bobwhite quail, vesper sparrow, American kestrel, and red-winged blackbird — whose numbers have seriously dropped. Now you can drive though the countryside and never see any
of them!
In 2015 the Potomac Valley Audubon Society (PVAS) launched its Grassland Birds Initiative. The first property to enroll was Claymont Farm. As of this month, a total of nine properties in the Potomac Valley participate, according to PVAS executive director Kristin Alexander.
Last summer, I enrolled our two hayfields as designated grassland bird habitat. My wife and I have been managing our property for wildlife since we bought the place in 2016. Until recently, I believed we were encouraging grassland birds by allowing natural vegetation to grow in our fencerows and rock breaks, and mowing only once a year, late in the season. Since enrolling in the Grassland Birds Initiative, I’ve learned this isn’t enough. In fact, studies show that long fence lines of trees, shrubs and vegetation that separate and constrict open fields offer predators like feral cats and red foxes easier access to any birds living in the fields, hampering their nesting success and adding to the problem.
Better strategies include allowing certain parts of a field to go un-mowed for more than one year instead of cutting the whole field. PVAS cites a large field in the Steamboat Run area near Shepherdstown as a prime example. They cut some of their hayfields only once a year on a rotating basis, while leaving others uncut for a couple of years. Birds nesting there have increased to levels that were never seen when they mowed everything yearly.
Farmers used to allow their fencerows to grow up, and would let certain fields lay fallow for a year or two to “rest the soil” and allow nitrogen to build up. Today’s more intensive agriculture requires all the land to be used. This means maintaining “clean” fencerows and applying additional chemical fertilizer to make up for the depleted elements in the soil. This also means added expense.
A better conservation practice, and one farmers are now starting to adopt, is to sow warm season grasses in fields that would formerly be allowed to grow up or lay fallow. Native grasses like big bluestem, Indian grass, fowl manna grass, switchgrass, muhly grass, and Eastern gamma grass can be cut for hay. But, unlike annual cool season forage grasses, they develop perennial hummocks of vegetation that offer grassland birds year-round protection: hiding places in winter, summer nesting places, and autumn food in the form of seed.
Results of these programs show an increase in field nesting birds and other wildlife. Fields planted in native warm season grasses attract more beneficial insects, such as bees, butterflies, and dragonflies. Turtles, non-poisonous snakes, toads, and frogs also find more food and places to hide in such fields.
I’m encouraging my neighbors to join us in creating more grassland wildlife habitat. You can improve your own backyard, even if it’s under an acre. Maybe you’re tired of weekly mowing — or of paying somebody else to do it. Instead, you could transform it into a beautiful, more bird-friendly place. Contact the Potomac Valley Audubon Society at www.potomacaudubon.org to learn more about the Grassland Birds Initiative and about Habitat Certification for smaller properties, a new program they launched
this spring.
Share Clarke!

The Weather Outside Is Frightful