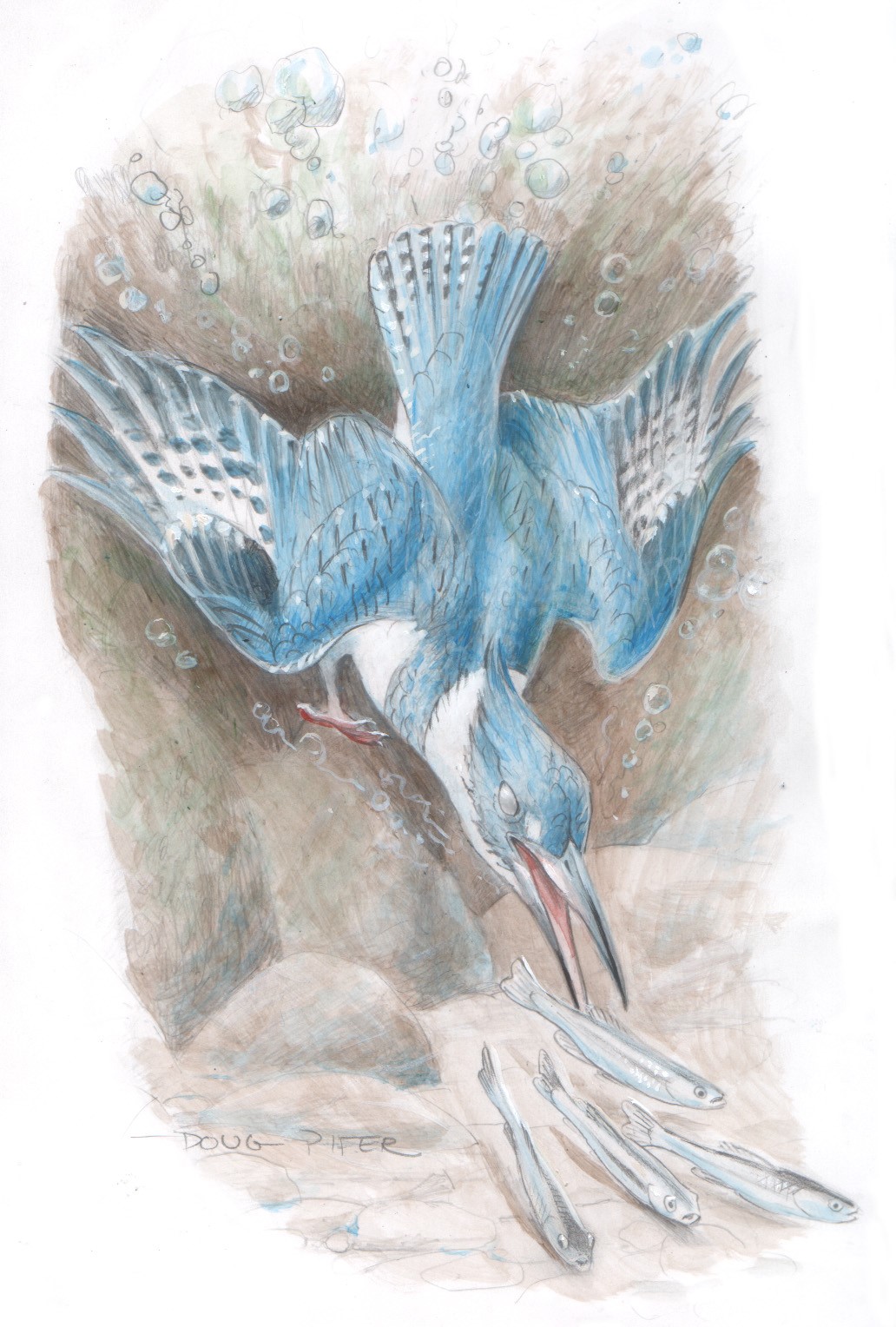 Story and illustration by Doug Pifer
Just as we passed the pond near the Freshwater Institute, we saw a kingfisher perched on a utility wire that ran about twenty feet above the water. Shooting swiftly straight down like a meteor, the bird spread its wings wide just before hitting the water just a few feet away from us. The arc of water from its impact shot more than a foot into the air, and the bird was up and flying back in the direction it came from before the splash had settled. Had we passed by a moment later we would have missed the
whole drama.
Belted kingfishers repeat this process many times daily. Like all predators, their success isn’t guaranteed. We’ve seen kingfishers dive many times and are surprised how successful most of these efforts are. Part of the accuracy might be attributed to the white spot kingfishers typically have in front of each eye.
Some scientists call these white spots “false eyes,” and believe kingfishers use them as sighting devices to focus on prey. A kingfisher, theoretically, uses binocular vision to align the white spots while looking down its bill at a fish, like sights on a gun barrel. This allows the bird to accurately compensate for the refraction on the water’s surface that makes a fish or crayfish appear closer than it is.
Sometimes, instead of diving from a perch above the water, a kingfisher will hover briefly and launch its dive from midair. When successful it carries its prey, usually a small fish, frog or crayfish, to a perch. Holding the prey tightly in its strong bill, it repeatedly slams it against the perch. After the prey is sufficiently stunned or tenderized, the bird tosses it upwards into the air and swallows it whole, headfirst.
A kingfisher’s unique appearance suits its way of life. Compared with most birds a kingfisher looks front-heavy.  A sword-like bill that looks far too big for the rest of the bird is supported by a large skull that flares widely at the forehead and eye sockets. The big-headed look is accentuated by the bird’s shaggy crest and
white collar.
Another odd kingfisher feature: tiny feet. Furthermore, kingfisher feet aren’t webbed as might be expected from a bird that gets its living in water. Instead, the two outer toes on each foot are fused together for most of their length. Their purpose becomes clear during the nesting season. Kingfishers dig tunnels in sandy or clay banks in the spring, stabbing their sturdy bills into the soil. The small feet handily scoop loose dirt backward and out of the way. After digging a narrow tunnel from 6 to 8 feet into the bank, the bird digs a nest chamber where it lays eggs and raises its young.
Photographers and bird watchers say a kingfisher is a good “scope bird.”  Kingfishers typically use a favorite perch—pier post, tree root, dead limb, or stretch of utility wire—as a launching pad and dining area.  So, you can set up a spotting scope or camera on a tripod and focus it on a perched kingfisher with a great likelihood that it will return to the
same perch.
Share Clarke!

A Revolution of Love
Functional Training For Everyday Health And Fitness

From Heartbreak to Change: Clarke County Graduate featured in Starbucks “...
Scroll to top