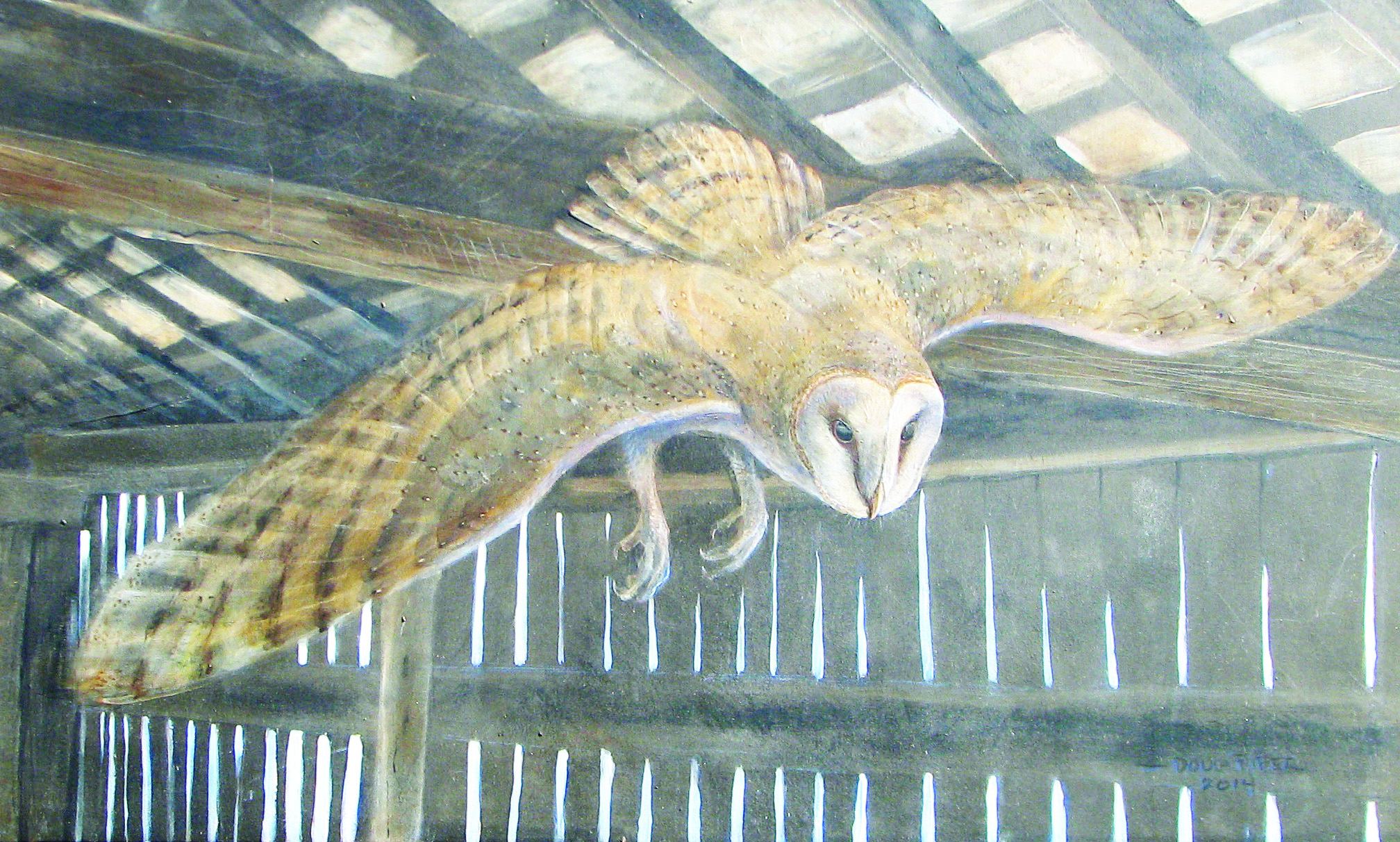 This past year I spent many hours inside the big barn at historic Clermont Farm just outside of Berryville. While working onsite in connection with a couple of events held there, I learned that barn owls have lived in one of the silos for many years.

Back in early February, I noticed several of the highest barn beams were streaked white with droppings, and below them I found dried droppings and owl pellets littering the floor.

Barn owls capture and feed upon small mammals and birds, which they swallow whole. Their strong digestive juices dissolve their food. Indigestible remains like hair and bones they regurgitate as pellets. Owl pellets tend to accumulate underneath perches and sites where owls nest and roost. For naturalists, pellets indicate the birds’ presence and what they’ve been eating.

The pellets I found on the floor of the barn under the white-streaked rafters were dark gray masses of hair about the size and shape of marshmallows or tater-tots. When fresh they were lightly coated with what looked like clear varnish. Pellets come out wet with the digestive fluids from the bird’s gullet but soon dry into lightweight, fragile masses that fall apart easily. These consisted entirely of rodent hair and bones. A few had starling feathers.

In late September I returned to the big gray barn. The contents had been rearranged to accommodate the summer’s hay harvest. The back doors were left open for fresh air to circulate.  And I noticed new owl evidence: fresh pellets, droppings, and feathers on the floor below where the birds had perched.

Later I observed, at the base of the silo where the barn owls nest, a pile of pellets that had disintegrated in the rain. Among them were many whole skulls and jawbones of house and field mice.  That’s why the barn owl is often called the farmer’s best friend. Unfortunately, barn owl numbers have suffered greatly from unrestricted use of rodent poisons around farm buildings,

All feathers are miraculous but owl feathers are especially unique. I sketched a barn owl killed by a car near White Post several years ago. At that time I learned that each colored feather on a barn owl has a teardrop-shaped spot of black and white near the tip, like a logo, that marks it as belonging to a barn owl. Nearly half their feathers are pure creamy white.

The biggest feather I found was shed from a barn owl’s left wing. I admired its “logo” spot, creamy color, and markings of dusky brown and golden tan. Most remarkable, though, was its “soundproofing.” A fine fringe edged all sides of the feather. Its upper surface had a velvety, pile-like finish. This made the markings on the feather softly blended, as if marked with colored chalk. Its purpose is to muffle the friction against other feathers while the owl swoops upon its prey.

Instead of rustling wings, a hapless mouse hears nothing at all.

On Edge for Spring Gobblers

Finding Center One Moment at a Time
Scroll to top