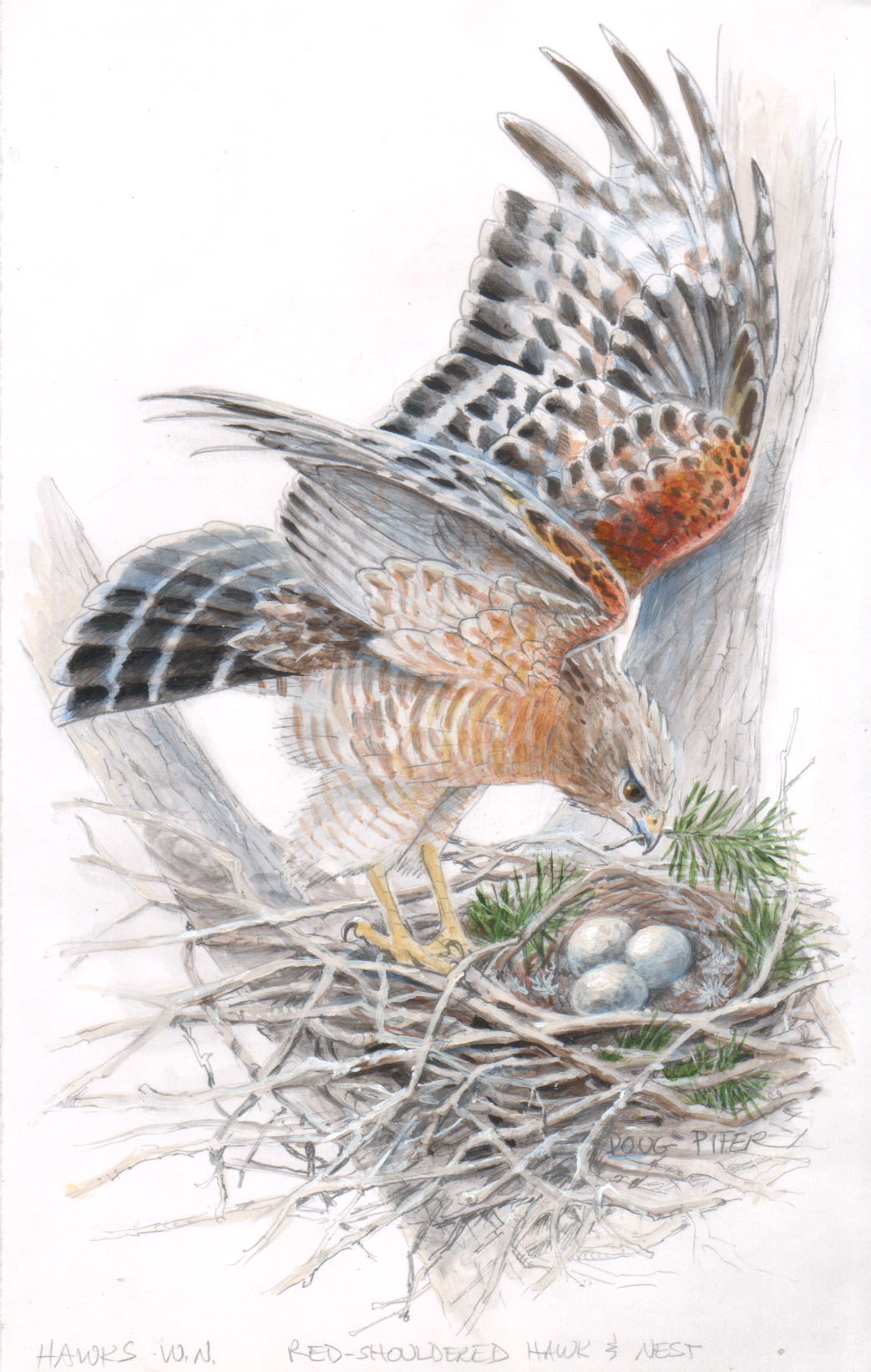 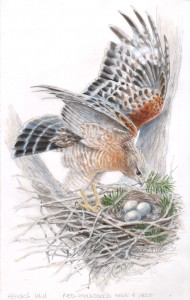 We’ve been watching a number of live cams of hawk, eagle and owl nests online. But it’s even more exciting to watch a pair of raptors nesting live from our own home.
Our property is part of the home territory of a pair of red-shouldered hawks. They seem to go about their business undisturbed by us. They use our pasture fences as hunting perches. Sometimes they just rest there with their buff colored breast feathers fluffed out. During the past six months we’ve grown used to hearing their calls and seeing them fly by with their black and white checkered wings and black-banded tails.
Towards winter’s end we noticed the hawks became more vocal. Sometimes they perched next to each other. They soared together, diving at each other and calling. My wife started saying they must have a nest nearby.
We learned the whereabouts of the nest in early March—it had been before our eyes all the time. We saw one hawk fly up to another one perched on the limb of a very tall sycamore that adjoins our property. Through the kitchen binoculars I saw them briefly mate. As they sat together afterwards, it was easy to see the male hawk was slightly smaller and trimmer than his mate, although they were colored exactly alike. It would be hard to distinguish them unless they were side by side. Both had the bright rufous patch at the bend of the wing that gives them their name. They had matching raptor expressions with short, hooked bills and piercing dark eyes.
Focusing the binoculars for a better look, we suddenly spied the nest right beside them. It was a cluster of surprisingly small twigs and branches about the size and shape of a big mixing bowl, hidden in the crotch of the sycamore among its white mottled limbs.
In the weeks since, we’ve heard them call repeatedly from the tree. If my chores take me into the nearby fields they often protest. The other day through the binoculars we saw fresh greenery lining the nest, absolute proof that the nest was active. Many kinds of birds, including raptors, carry fresh greenery to line their nests throughout the time they incubate their eggs and feed their young. Nobody knows exactly why.
Later that evening we observed the nest through the spotting scope. Dark raptor eyes peered from the softly feathered face at the nest in the big sycamore tree. Once I saw her gape her mouth, opening bright yellow behind the dark hooked bill, and call out.
My wife looked through the scope and saw the pair switch nest duty. One flew up to the nest and the other soon flew off. Another time one hawk flew off the nest and down into the dense cedars. Was it after prey or more evergreens to line the nest?
We expect to learn much from “our” nesting hawks.
Share Clarke!